STRODES MILLS – Playing in their second game of the District 5 Major League All-Star softball playoffs, the Bald Eagle Area girls were looking to stay undefeated when they went up against a spunky group from MIfflin County. 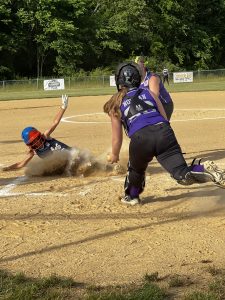 Eagle hurler Harlee Witherite had her A-game going as she no-hit MIfflin County, leading to a 13-0 win over the “Purple and White”.

In the win, Witherite finished with nine strike outs.

In the first, Bald Eagles got the scoring started.

She stole second and then third, putting her immediately in scorin position.

Teammate Macy Guenot joined Clark on the base paths, walking.

Clark later scored on a wild pitch, making it a 1-0 advantage.

Lilly Harter bought in Guenot on a fielders choice, making it a 2-0 contest.

In the second, the Eagles added to their lead.

Ella King doubles on a moved to third on a MIfflin County miscue. She later stole home.

Madelyn Jones followed with a walk.

With one out, Carley Guenot and Clark reached on consecutive walks to set the stage for Macy Guenot.

Guenot cleared the bases via a triple  that brought in Jones, Carley Guenot and Clark, upping the lead to 6-0.

Harter brought in Guenot on an RBI fielders choice for run number seven.

Things continued to roll for the Lady Eagles as they added to their lead in the third, posting six more runs en route to the win.