STATE COLLEGE – They had an answer for everything.

State College’s front line came up big in clutch situation as it constantly thwarted any kind of run that Chambersburg tried to make in their boys volleyball series Thursday night at State College High School.

“We ended up with 15 aces which is a good number but we had too many errors. Offensively we hit 274 as a team. Kuruzovich is pretty good he hit 611 it’s kind of like a batting average. If you hit .300 in baseball at the plate. Hitting 611 is pretty freaky,” said State College Co-coach Larry Campbell. “I think we are getting better. We have a long way to go. We have a young group.” 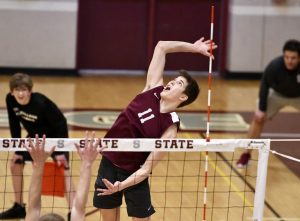 Brayden Kuruzovich was a power force in the front row and also had some powerful serves when called upon. Kuruzovich finished with 11 kills, 12 service points, eight assists and four digs. Seven of those points were aces.

In the first game, State College got off to a quick start.

In the first game, State College made a statement early, jumping out to an early 4-1 advantage.

They added to that lead from there as the Little Lions went on a six consecutive point scoring spree.

Picking up five of those service points were True. His final point in the scoring series was an ace.

Chambersburg fought back trying to get back in the game going on a 7-2 run closing it to a 12-7 advantage.

State College never left their foot of the gas as they remained seven points up in the game until the Little Lions added some cushion to its lead.

Closing it out on the service line was Jackson Gross.

That would be just a warm up game for the second one, the Little Lions continued to dominate the front lines and managed to heat up and come up with the 25-13 lead.

In the final contest, the Trojans stayed step-for-step with State College but the Little Lions would hit it out in the end, winning 25-21.

“I thought tonight we did some good things. We kind of see where we are at,” said Campbell. “A lot of work to go.” 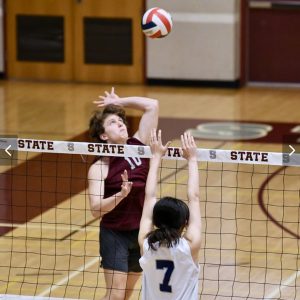