It was senior night as the Lady Raiders honored seniors Madison Melius and Ruby Bjalme. 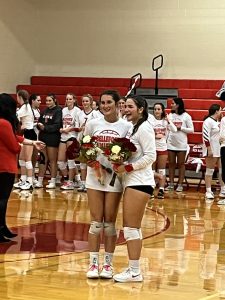 It was also a night to celebrate Carlee Pepperman’s 500th career kill. 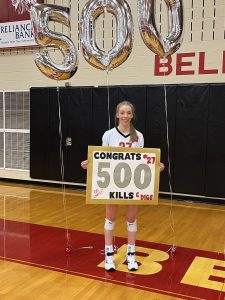 In the first game of the night, Pepperman reached her milestone, needing just one kill coming into the contest.

It was a back and forth thriller as Central Mountain just barely escaped with the 26-24 victory.

In the second contest, the Wildcats came out jumped out to an early lead of 10-3 and was able to hold on from there despite a late run by the feisty Red Raider team.

Bellefonte was able to nine points before the contest concluded.

With their backs against the wall, the Lady Raiders came out in the third game and forced a fourth game, winning a close 25-21 victory.

Bellefonte was behind by a 12-7 margin but Aubrey Schreppel had the hot hand from the service line, rolling off four consecutive points, cutting the Wildcat lead to one.

Trailing 15-12, the Red Raiders made another run, this time the team rallied around server Pepperman. Pepperman rolled out seven consecutive service points to put her team in the lead at 19-15. 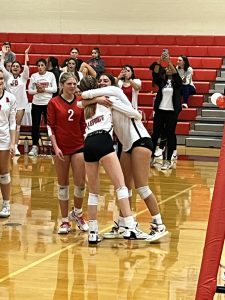 However, the Wildcats would get as close as 22-21 before Schreppel would stand back at the service line.

From there, Bellefonte rolled off three consecutive points to extend the contest to a fourth game.

From there, Central Mountain took over and took home the game, set and match winning 25-14.