SPRING MILLS – It was a sweet senior night success for the Penns Valley girls basketball team Friday night as the Lady Rams muscled their way to a hard fought to a convincing 58-46 victory over Clearfield.

Ann-Marie McMurtrie was clutch under pressure as she finished with a game-high 24 points. She also pulled down six rebounds on the night.

Julia Emel rounded out the Rams high scorers with nine points and 10 rebounds. 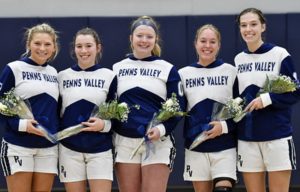 “Give Clearfield credit. They came to play and they played hard. We had to deal with the adversity tonight and we did a great job staying in it,” said Penns Valley head coach Terrance Green. “That’s what we talk about from the beginning of the season. At the beginning of the season we ask ‘ what do we want to be?’One of our sayings is practice hard better. Tonight was one of those nights we had to practice it better. Dealing with all the stuff that came with it. I’m very proud of them! Seniors obviously, getting a win on senior night. But it was a definite team effort tonight.” 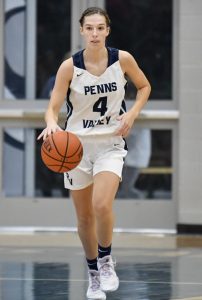 Defensively, the Lady Rams had the auick hands when it needed it forcing Clearfield into giving up 15 steals.

Both teams battled back and forth early on. Dinges and Paige Dobson led the way posting four points each, taking the game into the second quarter tied at 12.

Penns Valley started to take control of the momentum in the second quarter, led by the hot shooting of McMurtrie. McMurtrie ended the first half in style posting two triples in a 45 seconds, upping the Rams lead to 34-22 as the halftime buzzer sounded. She tallied 14 in the stanza.

From there, playing a feisty defense and a fearless inside game, the Lady Rams were able to keep the Bison at Bay in the second half, outscoring Clearfield 26-24 to notch the victory.

With the win, Penns Valley ups it’s Overall Record: to 8-4 while sporting a Mountain League Record of 5-2.

Next Game up for the Rams will be Monday, January 16th HOME vs Huntingdon. JV at 6 and Varsity at 7:30.