Maddie Johnson wins the all-around, tying a career-best with a 39.150 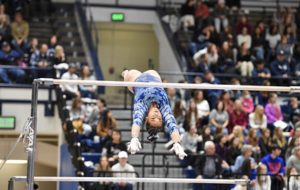 “Tonight was a really great home opener for us,” Head Coach Sarah Brown said. “I was really proud of how the athletes battled—that was our third meet in eight days—so it’s a lot on your body. I could feel at the end that they were losing a little bit of energy, but they never gave up and they had a ton of fight and a ton of grit throughout the night.”

Penn State bestowed its Ann Carr award to Johnston for her amazing night, setting a career best on the balance beam and tying a career-high in the all-around. 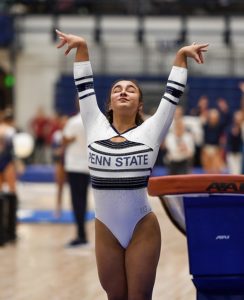 The Nittany Lions began the evening on vault, finishing with a season-high 49.000 on the apparatus as a team. Freshman Ava Piedrahita and sophomore Isabella Salcedo took the vault title, each scoring 9.850 on the event. Both gymnasts set season-bests with those marks.

Penn State moved next to bars where it posted a 49.025, its second 49.000 or better score of the night. Senior Cassidy Rushlow tied Mara Titarsolej from LIU for the event title, scoring a season-high 9.900. Piedrahita scored a career-best 9.850 and sophomore Elina Vihrova earned a season-high 9.800 to propel Penn State to the event victory.

Balance beam came up next for Penn State, and it scored a 49.150 on the apparatus, another season-best total for the Nittany Lion squad. Johnston turned in a career-high 9.900, propelling her to the top of the all-around rankings. Freshman Amani Herring continued her strong start to the season on the event by recording a 9.850. Herring has matched or eclipsed that mark in every meet this season. Fellow freshman Haleigh Gibble posted her second consecutive 9.850 and has matched or eclipsed 9.800 in every meet of the season as well. Rushlow supported a strong effort on the beam with a 9.8000 of her own.

The Nittany Lions finished the night on the floor, winning yet another event title. Herring’s career-best 9.850 paced the competition on the event. Vihrova posted her second 9.800 of the night, earning another season-best mark. Sophomore Jessica Johanson earned a 9.750 to round out the top-three for Penn State.

In the all-around, Johnston’s 39.150 tied a career high and gave the Nittany Lions their third different all-around winner in the first three meets of the season. Johanson (38.950) and Piedrahita (38.600) also competed in all four events for Penn State.

The Nittany Lions hit the road once again for their first Big Ten test of the season when they travel to Minnesota on January 21 for a 5 p.m.duel with the Golden Gophers.