One on One: Shippensburg Wrestler Trey Shoemaker
Oct 25, 2022

Photo credit Andrew Miller, SU Sports Information
Editor’s note – Recently, Hometown Sports was able to catch up with former MIfflin County and current Shippensburg University wrestler Trey Shoemaker. We talked to him about how he got started, some favorite moments and his future wrestling plans. 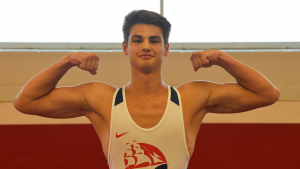 HS: How has the transition been from high school to prepping for your first year wrestling in college?

TS : The transition from high school to prepping for my first-year wrestling in college has been a whole new experience. It’s weird how I am yet again a freshman and have another four-years ahead of me to get better and accomplish more. We started practice earlier and grinded out preseason with a lot of conditioning.  However, I think that Coach Martin did a good job of conditioning us in high school, so the transition hasn’t been too difficult.

HS: When does your season start? What weight will you be wrestling at?

TS: Our season started two weeks ago with official practices, but our first competition is November 5th at the Alvernia Invitational where I’ll be wrestling at 197lbs.

HS: What are your goals coming into you freshman year?

TS: My goal as a freshman is to place at regionals. I know that it is a far-reaching goal, but if I work hard enough, I believe I can accomplish it.

HS: What are you majoring in?

TS : I am majoring in Criminal Justice.

HS: Talk a little about your senior year. You really had quite an strong showing!! What was one of your most favorite moments from that season?

TS : My favorite moment of my senior year was wrestling at team states and being able to get a couple wins as a team there. It was a fun experience where we were able to hang out as a team and battle against the best of the best.

HS: How long have you been wrestling?

TS: I have been wrestling since I was six years old.

HS: How did you get started in it?

TS: I started wrestling in kindergarten for Indian Valley Elementary only wrestling a few novice tournaments.

HS: Who were some big influences for you growing up?

TS: My biggest influences growing up were David Taylor and Ed Ruth. I remember watching them on T.V. win national titles or in person at Rec Hall and wanting to be just like them.

HS: I understand you made quite a memorable speech at last years wrestling banquet. I understand it was quite inspiring. What did you say?

TS: My speech was mostly just thanking everyone who supported me throughout my career because I had a big support system and could not have accomplished what I did without them. I also spoke to the underclassmen and told them what I had done to achieve success in hopes that they would take that advise and try to be the best that they can be.

HS: On a lighter side, your dad was a basketball guy and baseball..what brought you to wrestling?

TS: My brothers both played basketball and I guess I just wanted to be different from them. My dad, however, always tells a story when people ask him that question. He used to take my brothers and I to his basketball games on the bus and one day after one of the games, they got back early and there happened to be an Indian Valley vs. Lewistown wrestling match going on. I was with him, and we decided to stay and watch the end. The high school was packed, and it came down to the last match. The kid from Indian Valley ended up getting a pin to win the match and the crowd went crazy. He said he looked down at me and I was just looking around with my eyes open as wide as can be. He thinks that was the moment that I decided I wanted to wrestle.

HS: Was there a moment of moments that you saw as maybe as a major factor in taking that next step and you really knew that you had what it took to make a medal at the PIAA level?

TS: I think that after I won the Ultimate Warrior Tournament, I really thought that I had a shot at placing in the state and that really boosted my confidence going into the post-season.

HS: What advice would you give to any younger wrestlers that are starting out in your sport?

TS: The advice I would give to younger wrestlers starting out would be to have fun. It’s all about having fun. If you’re not having fun, then you shouldn’t do it. Wrestling is a tough sport and if you don’t love it, you will not enjoy yourself. Wrestlers are the toughest people out there and it teaches you to be resilient and work hard; characteristics that you will use throughout your whole life.