One on One interview with the Chicago Bears new member Kyle Smith
Apr 7, 2022

Editors note: Recently, A familiar sports voice and MIfflin County resident Kyle Smith was selected to an internship with the NFL’s Chicago Bears. We caught up with Kyle before he heads out to his new job and asked him about the move and his background leading up to being selected. Enjoy…

HS: How did the opportunity occur that you were selected to be an intern for the Chicago Bears?

KS: When I graduated I sent out a bunch of resumes and cover letters. There were a couple opportunities that didn’t really play out. Then through networking I heard about this opportunity with the Chicago Bears. I sent them my resume, cover letter, and references. After a long process and a couple of interviews I found out I got the internship. It was actually a very interesting way that I had found out. My wife has miscarried twice in the last half year. She was in the hospital having a D&C procedure when I got the call from the Bears. It was like a roller coaster with everything else going on.

HS: What will be your job when you get there?

KS: When I get to Chicago, I will be a seasonal equipment intern. I am not sure of all the specific responsibilities, but I will maintain equipment and do laundry, among other things.

HS: Tell us what experiences you have had early on to prep you for the job?

KS: To help me prep for the internship, I have been absorbing all that I can at Penn State. I was a student equipment manager for three years, and I have spent the last year interning there. As a student, I was Coach James Franklin’s manager and I did a lot with him. Since graduating, I have moved more into focusing heavily on the issuing and maintaining of equipment to the football team. I have tried to make myself a sponge and absorb all the knowledge I can to take with me to Chicago. 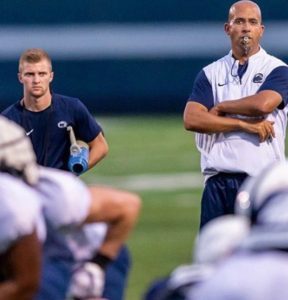 HS: Will you be working out of the group headquarters at Halas Hall?

KS: Yes, I will be working in Halas Hall.

HS: Chicago being a Major Media market, how exciting will that be for you to be in such an atmosphere?

KS: I think it will be a very exciting time to be in the atmosphere of Chicago. Growing up in

the Strodes Mills and Lewistown area, I know it will be a culture shock. But I am excited

nonetheless and I think it will be good for both me and my wife.

HS: How does it feel to move to the ‘Windy City’? Any nervousness?   What job did you have before taking the job?

KS: I am definitely nervous to move to the Windy City. But I am excited as well. I have always wanted to visit Chicago, and now I get to be closer than I ever could have imagined. However, I have never lived that far away from home so it will be different to be out there and no one we know will be close. 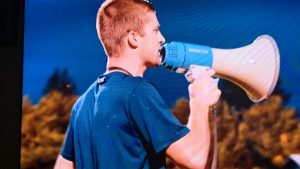 HS: How big of a dream come true is it to be involved with a professional sports organizations?

KS: This is a big dream come true for me. Anyone who knew me growing up knows I always talked about being on Penn State’s football team and then playing in the NFL. I then realized when I grew up to be 5’6”, maybe 5’7” on a good day with higher shoes, and 130 pounds that it may not happen the way I thought. I wanted to be a player, that didn’t pan out. But now I have a chance to achieve that same goal as an equipment manager. The road isn’t always straight but if you work hard enough and have faith, you can accomplish your dreams. I don’t want to sound cliché, but it really is true.

KS: I’ve had a couple of jobs before taking this internship. I have worked for my family business, Gravytrain Express LLC, since I was fifteen years old. I also did some play-by- play radio broadcasting for WCHX. I mainly did wrestling, but I dabbled in baseball and softball as well. My main job was being an equipment manager for the Penn State Football team.

HS: What is the first thing you’ll visit or do once you get settled in?

KS:,The first thing I want to do is, obviously, move into our apartment, but then I want to find some authentic Chicago deep dish pizza and see what all the hype is about. Big pizza guy. Also, I want to see Soldier Field and the Bean sculpture.

HS: How long was the process to earn the internship til you accepted the job?

KS: I sent my resume and refences out in November, and found out I was accepted in March, so it took roughly four or so months, give or take.

HS: Did you ever see yourself doing the job you are to entail?

KS: If you would’ve asked me this question a few years ago, I would have said I never envisioned this. But as I got into it at Penn State, I realized it was something I enjoyed and could be good at. When I graduated and got serious about looking for jobs or internships, I knew it was something I could see myself doing.

HS: What advice to younger kids would you give to get on the right track like you have?

KS:,I have a few pieces of advice I would give to younger kids. First, take your education seriously. We are blessed to live in a country that has an education system like we have. Take advantage of it. Second, do all you can to network. Networking and building relationships is just as important as getting a college degree. Both are important, but who you know could have a life-changing effect. Set goals and work hard towards achieving them. Start small and then get bigger goals. Tom Brady didn’t get where he is today without first learning how to throw a football. Take advantage of every opportunity given to you and be determined to go out and get those opportunities not just given to you. And lastly, when starting out, put your head down and work your tail off. One of the biggest things people notice about you is your work ethic and who is willing to go the extra mile. 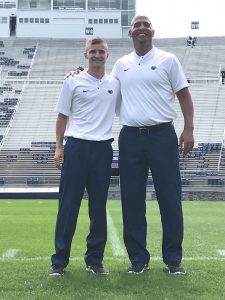