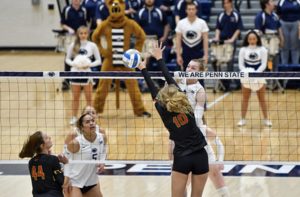 Joining Holland and Clark with double-digit kills were Zoe Weatherington with 12 and Kashauna Williams with 10. Alexa Markley added eight. Anjelina Starck was a perfect 4-for-4 on her swings, all from the back row, including a couple of nice roll shots. The Lions hit .266 as a team thanks to a .444 hitting percentage in set four.

Setter Seleisa Elisaia guided the offense while posting her eighth double-double of the season with 52 assists and 10 digs. Libero Maddy Bilinovic had a great passing night and was one of four Lions with double-digit digs. She had 12 digs, while Gillian Grimes and Cassie Kuerschen had 13 apiece.

Maryland’s setter, Sydney Dowler countered with a double-double on the other side, finishing with 41 assists and 12 digs. Anastasia Russ hit .429 with seven kills and seven digs. The Terrapins entered as the best blocking team in the nation statistically and added 11 to their total against the Lions.

Penn State tallied five aces in the win, giving them 16 combined in the two victories over Maryland this season. Bilinovic had two to give her 20 on the season.  Holland, Grimes, and Kuerschen added one apiece.

Holland was especially strong late to help the Lions pull away from a 19-19 tie in the final set. She had a kill to give the Lions the lead and then teamed with Elisaia with a block on the following rally. She had a kill to put the Lions up 22-20 and added an ace to set up match point at 24-21. The final point came on a Maryland attack error.

Penn State improved to 32-5-1 with their 29th-straight win in the series with Maryland. The Lions are a perfect 15-0 against the Terrapins at Rec Hall.