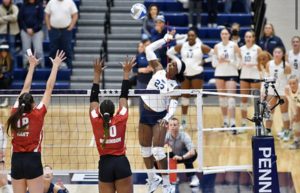 The Lions, who were coming off a 3-1 win over No. 9 Minnesota the previous night, closed the weekend with a record of 22-7 overall and 11-7 in the Big Ten. The Badgers remain in first place in the conference, improving to 23-3 overall and 17-1 in the Big Ten. 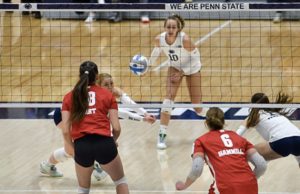 Penn State bounced back from slow starts in the first and third sets by responding with wins in the second and fourth sets. The fourth set win may have been aided by momentum the Lions picked up in the third when they fell behind 17-6 before battling back to get as close as one.

That fourth set, a 25-18 win for Penn State, saw the Lions hit .355 on their way to tying the match at 2-2. Kashauna Williams, who had 20 kills on .368 hitting in the win over Minnesota on Friday, came alive in a big way in the tying set, totaling seven kills on .545 hitting and two aces. Allie Holland added four kills. The Lions won the set easily despite having zero blocks.

The fifth set couldn’t have started much worse for Penn State as it fell behind 5-1. But the Lions clawed their way back yet again behind a raucous crowd of more than 4,000 fans. Trailing 7-3, they went on a 5-0 run to take a one-point lead when the teams switched sides. Zoe Weatherington was clutch during that run with her three kills and a block.

Penn State looked poised for another upset as it took an 11-9 lead on a kill by Holland. Wisconsin responded with a 5-0 run and eventually won on a block by Danielle Hart and Julia Orzol.

Five Penn State players finished with double-digit kills, including three that hit better than .400. Holland had a huge performance, hitting .467 with 15 kills and four blocks. Weatherington hit .409 with 14 kills, while Katie Clark had 10 kills on .467 hitting. Williams led all players with her 18 kills. Alexa Markley joined the group in double-digits with 11 kills.

Penn State setter Seleisa Elisaia put up some of the best numbers of her career, recording her 10thdouble-double of the season with a career-high 59 assists and 10 digs. Joining her with double-digit digs were Maddy Bilinovic with 12 and Cassie Kuerschen with 11.

Hart and Devyn Robinson led the charge for Wisconsin. Hart hit .650 with 13 kills and eight blocks, while Robinson had 17 kills and nine blocks while hitting .308. The Badgers hit .307 as a team.

Wisconsin improved to 3-26 all-time against Penn State at Rec Hall. It was the first matchup in Happy Valley between the teams since 2019 when the Lions won with a reverse sweep over the fifth-ranked Badgers.

Penn State played a nationally-ranked opponent for the ninth time this season. The Lions fell to 4-5 in those contests.

Saturday was the third-annual Silent Set, an event held in support of the Deaf and hard of hearing community. Fans were asked to remain silent until Penn State scored its ninth point. That number was chosen in honor of Jonni Parker, who wore the jersey for the Lions from 2018-21.

Up next for Penn State is a match at Northwestern on Wednesday at 8 p.m. ET. The Lions then close the regular season at home against Purdue on Friday at 7 p.m.