The Nittany Lions notched 166 rushing yards, averaging 5.2 yards per carry on the ground. Nicholas Singleton collected 46 yards on 12 attempts, and Sean Clifford had 23 yards and a touchdown on five carries. 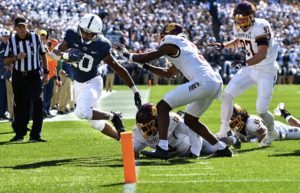 Clifford went 22-of-34 passing for 217 yards and three touchdowns. Parker Washington caught a team-high six catches for 64 yards and Brenton Strange had five receptions for 42 yards and two touchdowns.

The Nittany Lions had a 4-0 turnover advantage, producing two interceptions and two fumbles. PJ Mustipher had a team-high six tackles, and Dani Dennis-Sutton picked up a game-high two sacks. Kalen King broke up a game-high four passes along with a forced fumble and fumble recovery. Johnny Dixon andZakee Wheatley each recorded an interception.

The 2022 Penn State football season is presented by PSECU. 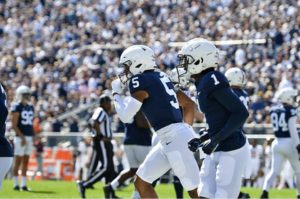 HOW IT HAPPENED
The Nittany Lions produced the game’s first score on a Mitchell Tinsley 5-yard touchdown reception with 8:42 left in the first quarter. Forcing a three-and-out after the kickoff, Penn State went 59 yards on nine plays in 4:56 in their first possession. Clifford went three-for-three for 47 yards on the drive, including a 27-yard throw to Washington on the first play.

Penn State needed just three plays on its next drive for a second touchdown, a 4-yard reception from Strange with 6:38 remaining in the opening quarter. Zakee Wheatley put the ball on Central Michigan’s 15-yard line after returning an interception 34 yards, which was aided by Ji’Ayir Brown hitting the quarterback on his throw.

Central Michigan got on the board with a 2-yard touchdown catch from Finn Hogan on fourth-and-goal with 12:39 left in the second quarter. The Chippewas converted three third downs for first downs on the 11-play, 45-yard drive.

The game was tied up with 6:25 remaining in the first half, as Richardson hit Joel Wilson for a 14-yard touchdown pass. After getting an incompletion on a Penn State fourth down at the Central Michigan 33-yard line, the Chippewas went all the way down the field on nine plays in 3:23. Richardson threw four completions for 56 yards, including a 20-yarder to Carriere to put Central Michigan in the redzone.

The Nittany Lions took back the lead with 1:58remaining before halftime on a 14-yard rushing touchdown from Allen. He had three rushes for 33 yards in the five-play, 98-second drive. Washington gave Penn State excellent field position with a 14-yard punt return to Central Michigan’s 34-yard line.

Penn State scored three minutes and five seconds into the second half on another short yardage touchdown catch from Strange, this time for 3 yards. The Chippewas gifted theNittany Lions the ball in excellent field position, muffing a punt that Curtis Jacobs recovered at Central Michigan’s seven-yard line.

Clifford ran in for a 1-yard touchdown, 17 seconds into the fourth quarter to make it 33-14. Penn State needed just four plays and 82 seconds to cover 52 yards for the score. Allen had a career-best 37-yard run to get the NittanyLions into the red zone.