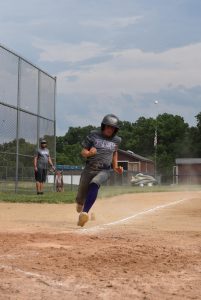 Mifflin County 12Us Can’t Catch Up To Central Dauphin White

The MC 12U All Stars struggled to put runs on the board and had a tough time defensively containing Central Dauphin White, giving up 11 runs.

Mifflin County tallied three runs in the third inning. Jaxon Strohecker and Jett Powell all contributed in the big inning with RBIs.

George led things off on the hill for Central Dauphin White. The fireballer surrendered five runs on seven hits over four and a third innings, striking out five.

Liam Shaffer was on the hill for Mifflin County.

The righty surrendered five runs on three hits over one-third of an inning. Gatlin Kauffman and Jude Zook entered the game from the bullpen, throwing four innings and two-thirds of an inning respectively.

Mifflin County tallied two home runs on the day. Strohecker had a four bagger in the third inning. Colton A went yard in the first inning.

Ezra Beamer led the 12U All Stars  with two hits in two at bats.

Still It was quite a week for the MIfflin County 12s as they finish second in the state in Cal Ripken action!