The Lions were one of four unbeaten teams in the nation 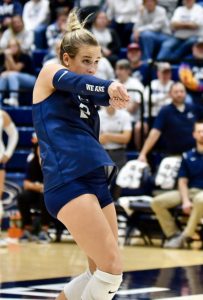 Jess Mruzik, a first-team All-Big Ten selection as a sophomore last season, had a big night for the Wolverines, finishing with 14 kills, nine digs, and four blocks. Jacque Boney contributed nine kills and six blocks, while May Pertofsky had an efficient match with eight kills on .538 hitting. 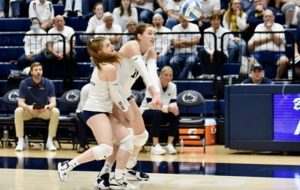 Gillian Grimes continued to have a solid freshman season from the service line for the Lions. She had the team’s lone ace and now ranks second on the team with 11 on the season. Grimes has at least one aces in eight of the team’s 13 matches.

Entering the match, Penn State was one of just four unbeaten teams in the country and the only undefeated team in the Big Ten.

Penn State is now 54-6 in the all-time series with Michigan. The Lions are 29-2 against the Wolverines at Rec Hall.

The Lions go on the road for their next match when they travel to take on No. 6 Wisconsin in Madison. The match is scheduled for 9 p.m. (ET) and will air live on B1G Network. The Badgers are 7-2 overall and 1-0 in the Big Ten following a 3-0 win over Northwestern.