MILL HALL –  Holding their own.

The Wildcats played the role of the crafty veteran while the young Huskies were looking to add a victory to their win column.

Mifflin County got off to a strong start posting a 2-0 advantage.

However, the Wildcats chiseled away at the MIfflin County lead and later went ahead and held on for the 5-2 home victory. 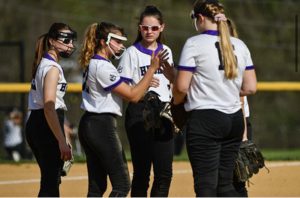 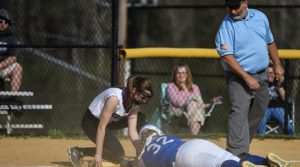 Central Mountain was led by the team’s leading hitter Caitlyn Bowman going 3-for-3 with an RBI and a double.

Teammate Maddison Wian followed with a 2-for-3, 2RBIs en route to the victory.

“I think early in the season we had some tight games. There were three extra inning games we won. We won all three of them,” said Central Mountain coach Fred Caldwell. “I think that’s helped us. Hopefully that pays off as we go through the rest of the season.”

Mifflin County got a strong night at the plate for Dakota Hershberger as she went 3-for-4 with a triple short of hitting for the cycle, posting a 2-run home run, a run and an RBI.

Picking up the win for the Wildcats was Allison Linninger. She combined with ace hurler Adalyn McKeague to keep the Huskies bats at bay.

But the Huskies battled throughout scattering six hits on the night.

Mifflin County hurler, Madison Wolfgang was consistent in her pitches, striking out six.

Despite the loss, the Huskies held their own throughout their contest with Central Mountain, the Heartland conference leader. Central Mountain is a perfect 9-0 in the league and an overall 10-1 record.

In the first inning, the Huskies got the game off and running. Arika Henry smoked a one-our single back up the middle.

With two out, Hershberger blasted a 2-run home run deep over the fence in center, making it a 2-0 contest.

Central Mountain cut the Huskies lead in half in the bottom of the inning.

Bowman opened the Wildcats first with a double that was hit into centerfield. She later scored on a 1-out single into shallow right field.

But Wolfgang shut the Wildcats down striking out the final two batters in the inning, keeping the Huskies in the lead at 2-1.

However, Central Mountain tied the game when Bowman singled home Kelcy Burrows to tie the game at two.

Mifflin County had the bases load in the top of the third but the Wildcat defense held tight to keep the game tied going into the bottom of the third.

With walks to Sophie Mitchell and Harley Kunes walked to set the stage for Wian. She did not disappoint roping a 2RBI double to give Central Mountain the 4-2 advantage.

From there, the Wildcats added a run in the bottom of the sixth and went onto the 5-2 Central Mountain victory.