MC girls XC shows strong effort on Pink out night
Sep 20, 2022
Courtesy of Neil Breneman
The Mifflin County Cross Country teams had their annual “Pink Out” on Tuesday evening, September 20 to raise awareness for the fight against cancer as well as raise money to be given to Mini-THON. The meet was held against a strong team with a lot of depth, State College, as well as Central Dauphin. The strength of State College’s team was too much to handle for the MC girls as they were defeated 15-47. 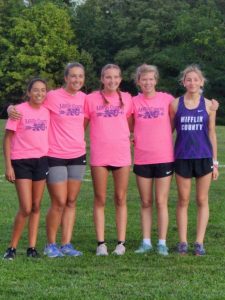 “Every year we know that State is going to have a rock solid team with a lot of talent. I knew they would be too much for us to try and go after, however, CD was a different story. Based on recent times they posted at an invitational I knew that with the talent we have on our team we had a chance, but it wasn’t a “give me”. 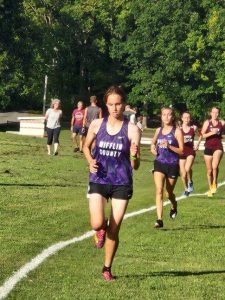 I never like to put too much pressure on the girls but tonight I really challenged them to go after CD and fight hard to secure the win, and did they ever! They defeated CD 39-20.
They started a little slow but quickly worked into the right positions and then held on. Other than giving up the 1st position, they took all of the next scoring positions. I was really proud of how much they stepped up to the challenge. 7 of them posted their season best times and we celebrated 4 new PR’s.
Kennadi Bauman, Ava Kratzer, and Maya Morgan crushed their previous PR’s by more than 2 minutes. That is significant! Ava Harris made a significant jump in her season best by nearly 2 minutes. Rachael Saldubehere broke the 27 minute barrier. It is incredible to see the strength they are gaining in their running as we move through the season. What I love is seeing how they are also gaining confidence in themselves and beginning to take bold and courageous risks.
The top 5 scorers were:
Adeline Leason- 21:41
Addie Parson- 21:43
Ava Harris- 23:43
Amilia Coffey- 23:50
Justice Sheaffer- 24:08