Local teammates continue to shine in Collegiate Level
May 23, 2022 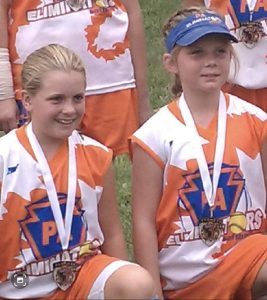 Crisswell made her name known from the get-go. She compiled hits in eight of her first 10 career games played in Florida during Etown’s spring break trip and finished the season with a team-high 49.

She led the Blue Jays offensively while taking firm hold of the starting center field position for much of the season. Crisswell ranked top five in the conference in multiple categories.

Crisswell, along with the other all-region honorees, will move forward to be considered for selection for the three NFCA Division III All-America squads, which will be announced May 24.

LOUISVILLE, Ky. – Another individual recognition for a member of the Penn State Altoona softball team rolled in on Monday, when freshman first baseman Gianna Hoppel (Lewistown, PA/Mifflin County) was named to the third team of the Division III All-Region squad by the National Fastpitch Coaches Association (NFCA).

Hoppel is one of just three Allegheny Mountain Collegiate Conference players selected to the All-Region team, which represents Region VII of Division III softball. The All-Region awards honor student-athletes from the NFCA’s 10 regions and are nominated and voted upon by member coaches.

Last Thursday, Hoppel was announced as having been voted to the first team of the AMCC’s All-Conference team.

All honorees on the NFCA All-Region teams move forward to be considered for selection for the three NFCA Division III All-America squads, which will be announced next Tuesday, May 24.

Editor’s note: Both players had spent time as teammates coming up through the local travel team and local softball programs.