Photos by Jeff Shomo
Submitted
Lower Dauphin (LD) field hockey jumped to an
early lead showing they haven’t lost much from
their 2021 PIAA state runner up team. The Little
Lions battled and continued to compete through
the entire game. State College’s (SC) Maddy
Shomo nearly got her team on the board, hitting
the post early in the second half, but ultimately
the scoreboard remained unchanged. 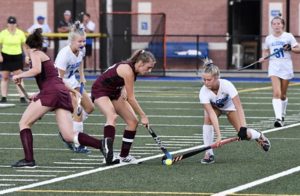 LD’s prowess was no surprise to SC. The State
College Team attended team camp at Lower
Dauphin the past two summers, learning and
playing with some of the best programs in the
state. These two teams know and respect one
another so much. State College Coach Sharon
Herlocher is a LD alumni who played for the
legendary coach Linda Kreiser. Post game, Coach
Kreiser texted Coach Herlocher,
“Your team’s
passing, quick restarts, stickwork and grit were
great. Good luck this season.
State College now returns home for 5 games.
Coach Herlocher is excited for her team to show
their togetherness and grit to the home fans.