Photos by Kathy Reed
LEWISTOWN – It was a scoring explosion! 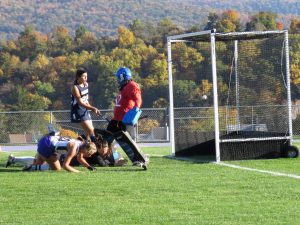 Hailee Sheetz finished the contest with a hat trick while teammate Adria Hartzler lit things up twice en route to the victory.

Mifflin County went right to work when Hailey Guyer blasted a shot off an assist by Sheetz at 13:31 still left in the opening period.

Less than a minute later, Addie Fultz followed with a goal of her own. She was assisted by Adria Hartzler at 12:48, making it a 2-0 contest.

Hartzler notched her first goal of the afternoon thanks to an assist by Sheetz, still in the first quarter at the 10:30 mark. 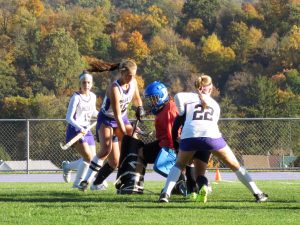 Sheetz smashed a shot past the Chambersburg goalie with an assist by Hartzler with 9:26 still left in the first.

In the second quarter, Sheetz hit an unassisted goal at the 6:06 mark.

The Lady Huskies went into the intermission leading 5-0.

Coming out of the intermission, Hartzler posted an unassisted goal at 13:01 left in the third.

Sheetz rounded out the MIfflin County scoring as she took a pass from Guyer and sent it home, finishing the game scoring.

The Huskies will be back in action Monday as they go head-to-head against longtime rival State College in the District 6 Championship game.