UNIVERSITY PARK — Penn State (8-3) is back in the win column after beating West Virginia (7-2) 69-57 in the Bryce Jordan Center Sunday. 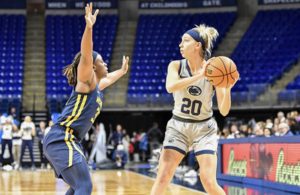 Penn State opened the game with a jumper, but WVU’s Ja’Naiya Quinerly scored the next eight points for her squad for the lead. The Lady Lions chipped away tying the game twice from the line and ended the quarter down 14-13. 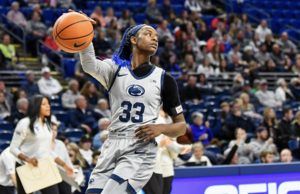 Penn State found their rhythm in the second quarter, scoring 11 points in a row, the first five by Leilani Kapinus and the next six by Shay Ciezki after the freshman drained back-to-back treys. Taniyah Thompson and Makenna Marisa immediately followed up with three-pointers of their own.

WVU stayed the course, going on a 13-2 run making it a one-possession game. But with under two minutes to go, the Mountaineers went cold while Chanaya Pinto made the Lady Lions’ fifth long ball of the quarter. Ali Brigham finished the half with a buzzer beating layup sending Penn State to the locker room with the 39-31 edge.

Marisa started the second half with a steal and dished to Kapinus who made a layup while drawing a foul. Midway through the period, Kapinus would block WVU and get the rebound, passing to Marisa whose layup extending Penn State’s lead to 13.

The Mountaineers would make three straight beyond the arc to whittle the advantage down to four. But the Lady Lions finished the quarter on a 7-0 run featuring back-to-back steals by Thompson.

Penn State maintained the momentum in the fourth as Ciezki made her fourth three-pointer to bring the Lady Lions their largest lead of 16 points. Meanwhile, WVU went through a stretch of no field goals for over seven minutes and a scoring drought of over three minutes.