Juniata uses last second goal to lift them to a win over Saint Joseph’s
Sep 26, 2022

MIFFLINTOWN – It was the thrill of victory and the agony of defeat in one shot!

The thrill went to Juniata while the Saint Joseph’s Wolfpack experienced the agony in boys soccer action Monday. 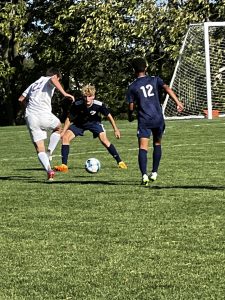 “We are such a young team this year. We have about four seniors that we use. We have no juniors and the rest are sophomores. We have been so up and down because we are so young. That’s to be expected,” said Juniata coach Jared Byler. “Tonight they showed a lot of maturity. We didn’t control the ball in the first. But in the second, we challenged them. They rose to the challenge. But what I’m proud of is these group of guys in those last thirty seconds did not quit. They realized they could still win the game and they went after it. And they got it done.” 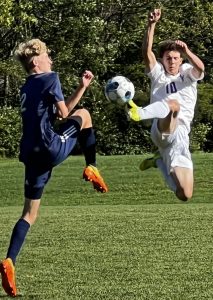 With the score tied at one in its final seconds, Juniata’s J’ Diel

It was a game that was a tight one from beginning to end.

Juniata was led by Rush who scored his team’s only goals.

Spencer Gigante put the Wolves on the board late in the ball game.

It was a back-and-forth contest from beginning to end.

In the first half, Saint Joseph’s had the momentum as they pushed the ball down into the Indians’ back-third. Despite being tested numerous times, the Juniata defense did not waiver as the Wolves’ were not able to push one through.

Saint Joseph’s even outshot the Indians in the first by a margin of 9-6. They also dominated the corner opportunities as well in opening period 6-1.

Midway through the first, Juniata started to turned the momentum back into its favor. After some near misses, both teams continued to try to find an opening in the defense to get a clear shot at the goalie.

Both goalies, Juniata’s Wyatt Dressin and Saint Joseph’s Luke Duckworth were almost unbeatable in the contest.

Going into the intermission, the score remained scoreless heading into the second period.

The Indians came out in the second with extra spring in their step and came right out of the break pushing the ball down the field. Hooking up with good passes, Juniata broke out with four unanswered shots before the ball being pushed back into the Indians end.

The drive was a temporary one by the Wolfpack as the Indians were able to take back possession and continued to pound away at their opponents.

Finally at 23:27, the Indians were able to get onto the scoreboard.

Leading the play was Brant Walters who stole the ball and quickly worked the ball up the field. After alluding two defenders, Walters pushed the ball inside to Rush. Rush got the perfect look and sent it past Duckworth, making it 1-0.

As the clock wound down to the two minute mark, the Wolfpack’s offense was able to get down into the Indians’ end.

Saint Joseph’s got its big break seconds later. A foul called on a Juniata defender put Gigante looking face-to-face with Dressin. It would be a stare down between the two, both trying to guess on the others movement. Gigante won the battle putting it through , tying things at one with 1:30.

With a potential overtime looming, the game went into a fever pitch as both were trying to line up one last shot.

With 20 seconds left, Juniata cleared the ball placing at the Wolves goal. After a few blocked shots  Juniata’s