Photos by Bob Hockenbrock
MILLERSBURG – The Juniata baseball team took to the road Wednesday to do battle with Tri-Valley League foe Millersburg.

Both offenses were very busy in the contest but in the end, the Indians came out the victors of the 9-6 contest. 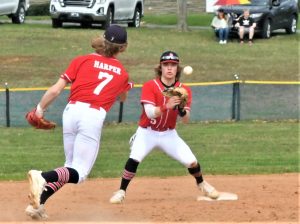 The Indians were led offensively by Bomberger and Dawson Harper went 2-for-4 while teammates Grant Reinhold and Colton Garver went 2-for-2. 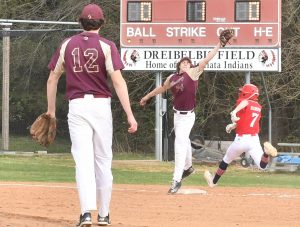 Millersburg got multiple hits performances by Brandon Snyder (2-for-3) and Mason Engle (2-for-4).

Offensively, Juniata was relentless with doubles finishing with four.

They were from; Bomberger, Jordan Dickson, Garver and Carson Kepner.

After a scoreless first, Juniata picked up two runs in the second.

But in the third, Millersburg battled back to take the lead, 3-2.

However, the lead would be only temporary as the kids from J-County outscored Millersburg the rest of the way 7-3 en route to the victory.