Juniata Indians Cross Country Team Shows Huge Improvements at Hershey Invitational
Sep 25, 2022
Courtesy of Shari Miller
The Juniata  boys cross country team showed they are a force to be reckoned with in the state of Pennsylvania in AA class.  The boys placed 7th out of 39 teams.  Senior Logan Strawser led the Indians with his 3rd place finish with a time of 16:16.  He was followed by sophomore Joey Bomberger in 27th place with a time of 17:27.  Sophomore Wyatt Stroup came in next for the Indians with his 38th place finish in 17:46.  Sophomore Wesley Ehrisman placed 85th in a time of 18:36.  Freshman Levi Zeiders rounded out the scoring with his 111th place finish in a time of 19:10.  Freshman Ricky Guante placed 193rd with a time of 20:17 and Charlie Telfer finished in 268th place with a time of 23:12.  This invitational is used as a pre state meet with most of the contenders for the individual and team title running it to get a feel for the challenging Hershey state cross country course.  Grove City won the team title with a score of 96.  Rory Lieberman of Danville won the race with a time of 15:48. 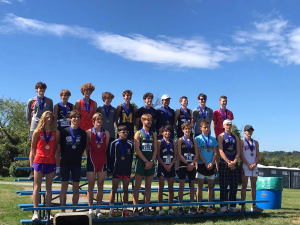 Juniata Coach Jeff Miller said “I thought the boys ran great today.  Logan battle two of the best runners in the state and dropped over 1:30 from his time on this course last year.  Joey Bomberger ran a exceptional race nearly running a personal best on this difficult course.  He shaved over 2:30 from his time last year.  Wyatt Stroup also ran a great race taking off over 3:00 from his time at this invitational a year ago.  I thought Wesley Ehrisman and Levi Zeiders ran great for their first time on this course.  I told Ricky Guante to just run 85 % – 90 % on this course because he had a soccer game later in the day.  I just wanted him to figure this course out so if all goes well, we will be back down here at the state championships in 6 weeks.  Charlie Telfer showed his hard work is paying off with improving his time over 4:00 on this course from a year ago.” 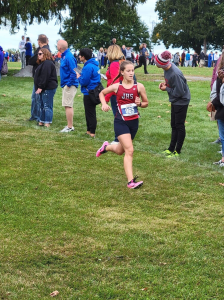 In the girls race, Juniata sophomore Jessie Bomberger was the only girl competing for the Indians in the AA race.  She placed 134th with a time of 23:53 and a personal best.  Coach Jeff Miller said “I told Jessie before the race if she could run under 25:00 on this course for the first time she would have a good day.  For her to break 24:00 was a great day.  She tends to run better the tougher the course is.  I was so happy for her to come away from this race feeling very successful.  She works as hard as anyone and I’m looking forward to seeing what she can do in the future.  I hope she learned this course well today.  She’s only a sophomore with one year of running under her belt so making it to the state cross country championships has to be a goal for her and I.  I know she will give me her all.”