It would be a nail biter to the end!

But when the dust settled and the last out was recorded, the “Purple and White” would come out on top 8-6.

Picking up the win in relief was Bella Yoder who came relief of teammate Gracey Napikoski. Both combined for a 3-hitter.

Napikoski went four innings, striking out nine before being relieved.

Offensively, Napikoski was a home run away for hitting for the cycle as she notched a triple, double and a single en route for a 3-for-3 evening.

Picking up the hard luck loss for State was Rachel Gilmore.

Despite the loss, Gilmore was tough on the mound, striking out six and scattered seven hits.

State College was led in the hitting department by Ryleigh Lintal. Lintal posted a double and a single.

After a back and forth battle, the two teams were knotted three going into the fifth. 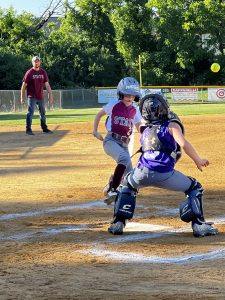 State College was very patient at the plate as Brooklyn Reed, Abby Szyninski and Lintal all scored on RBI walks by Rachel Gilmore, Calysta Steffie and Milana Lowe, taking a commanding 6-3 lead as the game went into the bottom of the fifth. 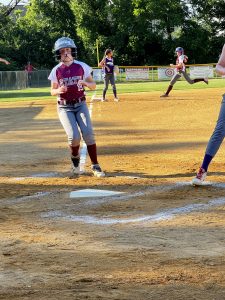 Mifflin County brought the bats out in the bottom of the inning.

Brenna Benny got the inning off and running smoking a double into right field.

Napikoski picked up an RBI as she hit a shot into left field, cutting the lead to 6-4.

Olivia Bedlyon hustled out a grounder that was bobbled on the play, moving Napikoski to third.

With one out, Bella Yoder grounded into an RBI fielders choice, scoring Napikoski and putting MIfflin County in striking distance within one.

With two out, Mifflin County would load the bases trying to tie the game.

Jemma Kanagy hustled out a slow grounder, reaching base and scoring Yoder.

Addison Yoder stepped in and came through in the clutch when she hit a come-backer into centerfield, scoring both Sarah Erb and Kanagy with a double.

Going into the top of the sixth, State College had one last chance to tie the game.

However, after getting a runner on base to start the inning, MIfflin County catcher Kanagy gunned down the runner who was trying to steal, getting the first out of the inning.

After walking two consecutive batters, Yoder stepped back on the mound and struck out the last two batters to give MIfflin County the win.

In the first, State College led off the game posting three runs.

Lead off Brooklyn Reed walked and then stole second. She tried to steal third and was successful, she then scored when the throw to third sailed a little over the third baseman.

Lintal singled and later scored while Rachel Gilmore both scored after being walked, taking a 3-0 lead.

Mifflin County came back with two in the second and one in the third, setting the stage for the drama that would occur late in the contest.