Huskies rally in the eighth, knocks off State College
Apr 26, 2022

STATE COLLEGE – Back in the win column!

With the game tied at two going into the eighth, the Huskies manufactured two clutch runs and held on in the bottom of the inning, clinching the victory. 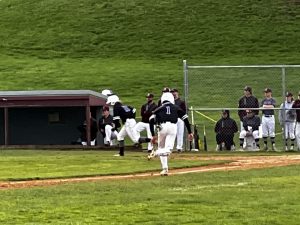 Leading the offensive punch was Luke Lyter, Hayden Yoder and Tucker Gill who all finished with 2-hit efforts.

Lyter had two RBIs on the night while teammates Landon Eichhorn and Yoder notched one in the victory.

Bryson Bubb picked up the win.

Mifflin County scored first, posting two in the top of the first.

They held onto the lead until to bottom of the fourth when the Little Lions tied things up at two.

Farrell Souders moved Hine to third as he hustled out a bunt single, putting runners on the corners.

Landen Eichhorn blasts a sacrifice fly far enough that Hine was able to score, putting the Huskies up 3-2.

Souders added an insurance run when he scored on a Yoder single.

Bubb and company shut down the Little Lions in the bottom of the inning, giving the Huskies the victory.