UNIVERSITY PARK, Pa. –Penn State women’s basketball is set to tip off their 2022-23 basketball season against Norfolk State on November 9 at the Bryce Jordan Center, and the squad couldn’t be more excited. 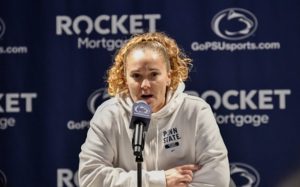 The 2022-23 women’s basketball media day revealed an established culture that head coach Carolyn Kieger has been striving for since coming to Happy Valley in 2019. Several talented returners have built what Kieger has envisioned and taught to the Lady Lions, and a new coaching staff and experienced and promising young newcomers have only built on it entering the season. This squad is ready to make to a leap and has expectations to match it. 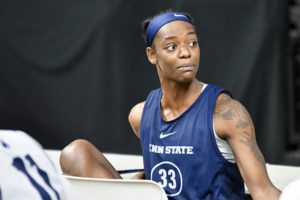 Coach Kieger noted that when she first got here, big recruiting classes felt like big classes because the culture had to be fully ingrained into the program. Now, thanks to having experienced veterans that have been around the first three years, it has been a different atmosphere.

“Now that I have leaders who have been under me for the last three years, it can be more player lead and coach fed,” Kieger said. “The fact that we have six new players and we’re what, four months into having them here, it doesn’t even feel that way. It feels like they’ve been here forever because our leaders are doing such a phenomenal job showing them the way of driving the culture, fixing mistakes before I have to and really setting the standard.”

Senior Anna Camden is well known for her tik toks and other social media content in the new age of name image and likeness, most notably when she ran a basketball camp Sept. 17 with all proceeds going to charity. Her work in the community, along with her leadership in the locker room, Kieger attributed Camden as being the catalyst of the rebuild.

“She’s Miss Penn State,” Kieger said. She wears it every day. She loves this university. She loves this program. And she wants nothing more than to see us win and to see the jersey in a better place than when she got here.”

At Camden’s camp, the rest of the team was there to help. This is just one of many bonding events done during the offseason, as the team went out to a cabin in the woods for a full weekend in July. It created many team bonding opportunities and helped developed leadership in terms of gaining mental, physical and emotional toughness.

“We had a couple of nights by ourselves as a team to grow,” Kieger said. “But, it was also team building. To push ourselves out of our comfort zone, to create adversity and respond to adversity because I mean, that’s what mental toughness is, right? Being able to handle adversity and stay the course. And they did phenomenal. They handled it well.”

“It just sets the tone for the year. What we’re trying to do and set our goals. Have family time, and just talk to each other about who we are as people, who we are as competitors, and how we maximize our strengths.”

Last season saw a big jump for Makenna Marisa, who went from All-Big Ten honorable mention in 2020-21 to first-team All-Big Ten for the first time.

Going into this season, Marissa was named to the Nancy Lieberman watch list. And Coach Kieger can’t wait for the senior to finally be recognized for her play.

“It’s remarkable how much she’s improved,” Kieger said. “I can’t wait until she gets the national recognition that she deserves because she no doubt is one of the best guards in the country, and deserves to be in those All-American conversations.”

Marissa has also become a role model for the younger players on how to become better prepared physically and mentally for games. Over the course of her Penn State career, Kieger attributes Marissa’s progression to how much load management has helped out.

“What has separated her I think the last couple years is understanding load management,” Kieger said. “Understanding when it’s a day to go hard and get shots off the move versus shooting wraps, or when to watch film and go into the ice bath or when to get the calories that she needs or the hydration. And she’s matured so much throughout her career.”

Alli Campbell was not able to play last season due to an injury. A transfer from Notre Dame after the 2020-21 season, the Altoona native will be playing her first full season for the Lady Lions, and the coaches have high expectations for her.

“She’s worked extremely hard after coming back from injury,” Kieger said. “She looks great. Obviously, she was a high school All-American. To bring her back, we have very high aspirations for her, and she’s really locked in mentally and physically right now to do whatever she can for this team to win.”

Campbell brings a versatile skill set on both ends of the court. With this versatility, Kieger is excited to see how the redshirt sophomore will help the team.

“Those kinds of swings, as we call them in our program, they can step out or they can step in. They can be a mismatch. And defensively, it’s going to make us just so much better when we’re using our legs and switching out for smaller defenders. I’m excited for both sides of the ball for her because I think you’re gonna see that versatility and that composure on both ends.

Penn State saw an overhaul in the staff this offseason. Former Lady Lions Maggie Lucas and Terri Williams along with Sharnee Zoll-Norman were hired as assistant coaches. Current Connecticut Sun player and former player under Coach Kieger at Marquette, Natisha Hiedeman, was recently hired as the director of player development.

Three of the new staff members (Lucas, Zoll-Norman, and Hiedeman) have WNBA experience. With this, Kieger believes that it will pay massive dividends in the development of the team.

“To have three either current or former WNBA players on our staff is just phenomenal for our young women and they can look up to,” Kieger said. They’ve won at the highest level. They know what it takes.”

The youngest of the trio of assistants, Lucas was one of the most decorated players in program history. Now in her first coaching job, she has been thrown into the fire so far with having to learn on the fly. However, Lucas has been a “sponge,” and Kieger can’t wait for her to become a coach.

“You guys obviously had seen her work ethic as a player, Kieger said. “It’s no different when it comes to coaching. She has a high IQ. She’s been in the gym getting our players better, getting extra shots and showing them what it takes footwork wise, what it takes hand position wise and obviously recruiting.”

As for the most recent hire, Hiedeman continues her professional career, but has chosen to become an assistant instead of going overseas for her WNBA offseason. Kieger is excited to help expose her former player to coaching.

“It’s been awesome to have her in the program and just be another inspiration and motivator for the young women,” Kieger said. They can pick her brain on what it took to get there and what it took to win.”

Coach Kieger has a team with many fresh faces added from last year. While it is many new pieces being added, Kieger is confident this team adds more toughness. She is also assured that the fans will be seeing an improved product this year.

“This is the type of offense and defense we’ve been building towards,” Kieger said. “We obviously needed the right personnel to get to this point, but we have the pieces and versatility now to play the way that I’ve wanted to play here. We can push pace, defend, be versatile, and we can switch. We can be tough, really disrupt people and dictate them on the defensive end and finish the rebound battle.”

Kieger has preached to her staff that they have to be great teachers to the players. With this, it’ll have to strategize how to put the players in the best position to win ball games, and Kieger is ready to do so.