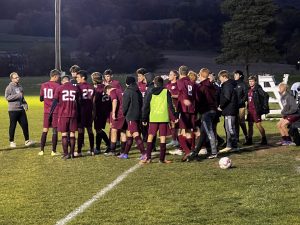 DANVILLE — East Juniata and Northumberland Christian were going back and forth throughout the game. But ultimately, it was East Juniata who came out on top to become the 2022 District 4 Class A boys soccer champions 2-1 in overtime.

And the hero of the game was none other than the Tigers leading scorer Jake Brackbill who managed to get a breakaway from the Northumberland Christian defenders and rocketed in the game winner.

Throughout the first half, both teams were trading shots with one another but neither managed to capitalize on its respective opportunities.

It wasn’t until halfway through the first halfway of the match when East Juniata finally got on the board as Dontae Martin found himself one on one with Warriors’ goalie Conner Bennett and it was Martin who found the way to score and put the Tigers up 1-0.

However, Northumberland Christian showed why it was the number seed heading into the match and responded on a corner kick where Daniel Hayner sneaked his way inside the box and tapped one in for even the game at one apiece.

No one managed to get the ball into the back of the net, but it was not for a lack of trying as things started getting a little chippy between both teams as each were despirately trying to knock in the go ahead goal. But both defenses showcased great heart and hustled and denied any sort of a chance for the other to score.

East Juniata is now (19-3-1) and will now prepare for the PIAA State playoffs.