Photos by Bob Hockenbrock
Crown them the champs! 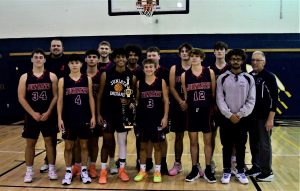 The Juniata boys basketball team had a very successful weekend capturing the title of the Southern Huntingdon Tournament.

After a victory on Friday, the Indians met the host Southern Huntingdon Rockets in the title tilt.

Juniata controlled the contest, posting a close 41-32 victory over the Rockets.

Caleb Smith and teammate Jasper Shepps were cool under pressure both posting 16 points each.

In the first, Juniata held off Southern 11-8 early after one.

Shepps led the way with six.

In the second, the Indians’ defense clamped down allowing just four points while it’s offense collected 10.

Like in the first quarter, Shepps led the way with six.

Going into the intermission, Juniata held a 21-12.

Coming out of the break, the Indians once again outscored the Rockets, this time Juniata posted a 12-7 scoring binge.

Going into the final stanza, the Indians remained in control of the momentum, 33-19.

Despite being outscored 12-8 in the the final stanza, the Indians still had plenty enough to hold on for the win and the championship.

Juniata supplied numerous players to the All Stars from Juniata at Southern Huntingdon Tournament.

Taking the moniker of MVP was Caleb Smith.