“I was put on this earth to dominate people on the mat.” 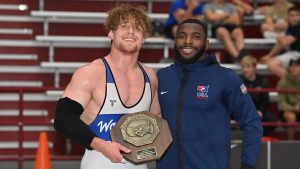 Trent Hidlay said that to me during his junior season. He also told me after finishing second to Caleb Young at states his sophomore year; he would never lose again in high school.

I didn’t believe him. I didn’t say that to his face, but that’s what I was thinking. Over the next two years, I learned something significant.

All he did the next two seasons was go 81-0, win two PIAA titles, and wasn’t taken down. He did it by dominating people on the mat.

Some will read these comments and immediately conclude that Hidlay is arrogant. I’ve had people tell me this. Nothing could be further from the truth.

Extreme confidence is often mistaken for arrogance. Not true with Hidlay. He has complete, audacious faith in his mental toughness and ability. He worked damn hard to reach the pinnacle. Yes, he has natural talent, but no champion becomes a champion without a Herculean work ethic.

Trent earned through blood, sweat, and tears every accolade, every medal, and every trophy in his ever-growing collection. I can say from personal experience, and without a shred of doubt, he is not arrogant.

He is a hard worker, intelligent, polite, a great teammate, and an even better leader. He is just as happy when a teammate wins aswhen he does. I saw it firsthand when Derek Burk made it to states in 2018.

When Burk won his regional match for third, I looked over, and Trent was jumping up and down, waving a white towel, all pumped up.

He embodies the qualities every individual should strive for. Look no further than older brother Hayden and his interview after finishing third at nationals in March. It was the most impressive interview I’ve ever seen. Watch a replay of it if you haven’t seen it yet. It takes little thinking to see who is Trent’s biggest influence and who he models himself after.

If positive mentors are vital for success, Trent picked a good one to model in big brother Hayden.  ​

“If one advances confidently in the direction of his dreams and endeavors to live the life he has imagined, he will meet with a success unexpected in common hours.”

I don’t know if Trent ever read Walden, but I know he personifies the meaning behind the quote. He confidently goes after what he wants.

If I’m permitted to play amateur psychiatrist here for a moment, perhaps people think he’s arrogant because they don’t want to face their insecurities. A high achiever makes some uncomfortable because then they must man up and realize they’ve wasted most of their potential by fear of trying.

No matter. Hidlay doesn’t let the opinions of others affect him or the pursuit of his goals. He remains focused on being a standout student (4.0 GPA) and an even better wrestler.

Trent’s dominance was on full display at the U23 World Freestyle Team Trials over the weekend. Going into the event as the top seed at 86 kilos, Hidlay dominated the competition, going 7-0 with five technical falls, outscoring his opponents 76-10.

In the best-of-three finals, he bested Trent Munoz by 12-1 and 10-1 scores. Now it’s off to Spain and the U23 World Freestyle Championships in October. First, he wrestles at Madison Square Garden on June 15 against Mark Hall for true third and a chance to make the Senior World Team.

Hidlay believes he can bring a U23 world championship back to Mifflin County. It seems like a monumental task, but I’ve learned from personal experience over the years to dismiss nothing Trent Hidlay says.

My money is on him bringing home the gold while dominating people on the mat.