Bellefonte uses walk off runs to send them to D6 championship game
May 19, 2022

The Bellefonte softball team dramatically advances to District 6 title game after a tough walk off 2-1 decision over Hollidaysburg at Bellefonte Thursday.

It was a pitcher’s duel as both team’s stayed off the scoreboard until the top of the fifth when the Golden Tigers picked up its lone run. 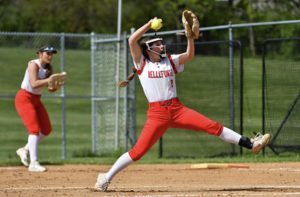 Pitching for Bellefonte was Carley Clarkson as she went the distance striking out five and allowing three hits in the victory.

Trailing 1-0 going into their final at bats, the Lady Raiders were cool under pressure as it mounted its historical comeback.

Maddison Ripka led off the inning with a walk. Shaylin Ripka came into pinch run for her.

Grace Novitsky tried to move Ripka up and did as he bunt attempt was miscues by the Tigers, putting runners on first and second.

With two out, Madison Melius singles in Ripka, tying the game at one.

Tara Reichert roped the game winning run posting a single, allowing Novitsky to score and send the Red Raiders to the title tilt.

Next Wednesday, the Lady Raiders will travel to Saint Francis to take on Central Mountain.