BELLEFONTE – When you think of sports dynasties and traditional greatness on team that should be at the top of the list in Centre County should be the Bellefonte team under the direction of longtime coach the of the Lady Raiders. Early in the year, the team added to its long list of strong finishes as they captured the D6 title and earned a trip to the PIAAs.

In order for the girls to make the state competition they had to win it all and they did just that. They had to also outscore.

They had to defeat Altoona, MIfflin County and State College to qualify.

The group has been practicing since July for that one competition.

According to their coach the girls are very dedicated in their performances.

With the closeness of the group, the cheer group has bonded and are like a family. It’s the same chemistry that is needed for good things to happen.

The group performed against the best-of-best in the entire state of Pennsylvania.

Though the group held their own throughout coming up a little short to capture the state title.

But the road to state competition was not for the faint of heart as the cheer group goes through countless hours of workouts, training and staging before even getting to the performance aspect of theirs.

Not only that but they also have to learn performances for the sports teams they support.

This group of cheerleaders are very proud of their run at the championship this year.

The group is averaging practices that go 2-hours a night and still gets their work done in class as well. 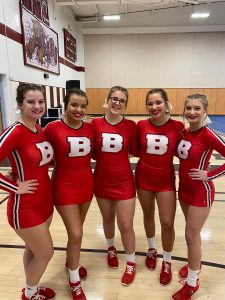 Most of the cheer group has also made the honor roll.

This group will add its name to the long list of great teams the Red Raiders cheer squads. And one that might be declared on of the best in the successful tenure of Headings. 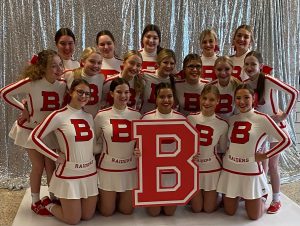