Believe in the Process. Breon has young Huskies focused and primed for upcoming season
Aug 22, 2022

LEWISTOWN – Believing in the process.

This year, the MIfflin County Huskies football team has a new head coach and staff roaming the sidelines this season.

Former MIfflin County native and stand out high school athlete, now veteran coach Shane Breon has made the trek back to his roots to take over his hometown team. 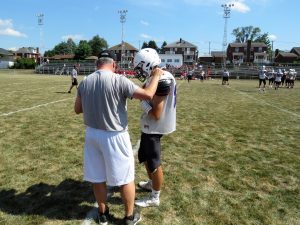 His background is not only in football but in baseball as well. Having been a stand out baseball player going the local baseball ranks.

Everywhere Breon has gone it produced a winning atmosphere and it has already started to trickle down to his new players who have bought into believing in the process.

Breon has made his way through as coach at different Mid-Penn powerhouses.

The new coach is glad to be back home.

“It’s great to be here. We’ve had some good coaches here and some good players. Hoping we come back and do what we can do and get this thing going and get it rolling,” said Breon. “ I know in my heart it’s a football area. I’ve seen it, I’ve witnessed it so it’s good to get back. The kids are working hard and getting ready for next week.”

Since being hired as the new head coach, the athletes have bought into the system and have been dedicating themselves to off season workouts and lifting.

His brother Sandy has also joined his brother on the sidelines and is taken the offensive coordinator position. Both Breon’s has coached in both the Mountain League and Mid-Penn Conference.

“I’ve coached in that league (Mid-Penn) before and I know a lot of coaches there in that league,” said Breon. “I think for MIfflin County going forward has to be strong work ethic and get these kids working out in the off season. This thing is going to take off and it will get rolling.”

Going into Saturday’s scrimmage against Juniata, there was a sense of confidence and optimism in the air.

Fans were treated to a preview of what’s to come this season and went home with strong anticipation of where the team is going.

. Penalties and mental mistakes were few and far between.

Also, from first string on down, the team showed that it will play until the whistle blows. All good signs for a strong showing.

“Usually, the defense is ahead of the offense. They got a lot of veterans and they’re experienced and they showed it today,” said Breon. “The offense is a little behind but we’re getting it. It’s a whole new offensive system the kids need to learn. A lot of them had stuff going on til the end of July so we’re getting there and we’re going to improve upon it.”

With the season opener set for Friday, Breon likes the progress and the efforts the team has shown so far but knows that there are some things that they need to work on.

“We didn’t really show a lot today (play wise). We still have some more stuff in there we didn’t want to show today. We have to refine what we have,” said Breon. “Everything’s in we just have to refine it. The kids are picking it up. A few things here and there they got to get quicker reading. The quarterback needs to be quicker and lineman need to do a better job upfront. We’re getting there.”

Overall, after their contest against Juniata the coach likes where his team is heading and is excited about the upcoming season.

“We’re pretty disciplined. I’m very happy with where we are at,” said Breon. “I’d like to be a little further ahead but we’ll be okay.”