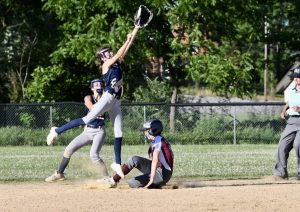 Both teams battled first in the opening round of District 5 post season action.

On Monday, the Lady Eagles made it a sweep as their offense exploded for 11 hits in a 10-2 victory. 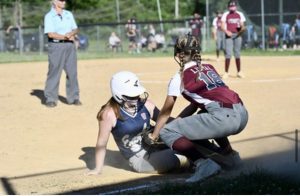 Picking up the victory for the Eagles was hurler Harlee Witherite. Witherite held the State College bats to just four hits, one earned run and eight strikeouts. 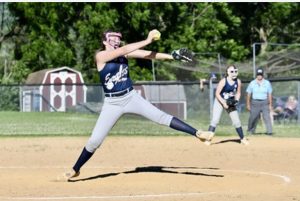 After keeping the Lady Little Lions off the board in the top of the first, Bald Eagle came out swinging.

Leading off, Clark roped a single back the middle to start off things.

Guenot followed with a single down third base, putting runners on first and second.

Harter blasted both in sending a sizzling shot into the outfield, scoring both Clark and Guenot.

With one out, Witherite doubled to set her team up for another run.

Teammate MacKenzie Chambers blasted Witherite home as she hit one to right field, ending the first inning scoring at 3-0.

Witherite was unstoppable on the mound in the second, striking out all three batters and giving the momentum back its hot bats.

Bald Eagle had a little 2-out lightning going, plating both of their runs with two out.

Guenot kept the inning alive sending a shot back the middle. She stole second.

Up came Lilly Harter, who brought Guenot home easily plastering a shot into left field, making it a 4-0 advantage.

Harter scored the team’s final run in the inning, sending an RBI single into left.

Both teams remained scoreless in the third.

However, State College was able to get two hits in the inning.

Picking up hits were Moore and Whitmer. Though the Lady Little Lions got runners on, Bald Eagle’s defense stood tall and sent State College down scoreless in the inning.

But in the bottom of the fourth, Bald Eagle continued to add to its lead posting two more, upping its lead to 9-0.

In the inning, Bald Eagle rallied for a 4-run inning, highlighted by double by Witherite.

However, State College refused to go down without a fight, notching two late runs in the fifth.

But it wouldn’t be enough for the comeback as Bald Eagle added a run in the bottom of the fifth helping them capture the 10-2 victory.

The win by Bald Eagle puts them against Clearfield.

State College finished their run with a 3-2 record.