Port Royal Speedway– PORT ROYAL, PA – (April 24, 2022) Anthony Macri and Logan Wagner have been cream of the crop all season at Port Royal Speedway. The duo have finished 1-2 twice already this season and between the pair, they had already captured four victories when entering Saturday’s 7th Annual Tezos All Star Circuit of Champions Keith Kauffman Classic presented by Valley Supply.

Continuing with the trend, the pair put on a battle for the ages as Macri held off the very best Wagner had to  give to pick up the $10,000 victory in front of a jam-packed crowd Saturday night. The win was Macri’s second in the event in the last three season’s and his fifth career triumph with the All Star series. 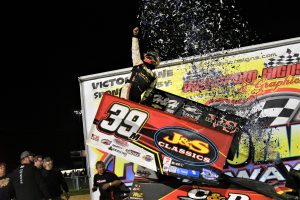 “After our incident, me and Logan talked on the phone and we came to the conclusion that we were not going to give each other an inch,” said Macri. “With starting sixth, I knew I needed to make something happen on the start as it was going to be a battle.”

Wagner and All Star competitor Parker Price-Miller led the field of 28 drivers to the green flag and it was Wagner taking the lead on the opening circuit. Wagner’s father, Mike, was third after setting Packer’s Concessions, LLC. Quick Time earlier in the night.

Macri started sixth on the grid and by lap six he was lurking outside of the podium in fourth. One lap later the leaders were already in heavy lapped traffic and two laps later Macri moved into third.

Macri got by Price-Miller on lap 11 and he quickly started to reel in the four-time defending Port Royal Track Champion. By lap 17, Macri was all over the tail-tank of Wagner and the two exchanged slide-job’s the following lap before Macri took over the top spot on lap 19.

However, Wagner wasn’t finished yet. Wagner stayed close and on lap 24 and 25 the top two drivers brought the fans to their feet with sliders at both ends of the racetrack. It appeared that Wagner may have finally gotten the best of Macri, but the caution flew for a slowing TJ Stutts on the frontstretch to give Macri back the top spot.

“I was driving pretty aggressive and I may have been too aggressive too soon,” said Macri. “He was all over me and I knew I needed to make the car as wide as I could to keep him behind.”

With clean air in front of him, the expectation was that Macri may have caught a break. However, Wagner was far from finished trying to score his second consecutive Kauffman Classic and the pair raced within a car-length on the restart.

Coming to the two-to-go sign at the flagstand, Wagner raced alongside of Macri entering turn one and threw a slide job to briefly take over the top spot. However, Macri had the momentum entering the backstretch and regained the lead to take the white flag. Wagner tried the move again in turn one, but this time Macri pinched him down just enough to break Wagner’s momentum.

Wagner tired to regroup down the backstretch and rode the wall in turn’s three and four hoping for a miracle, but it was Macri by a margin of .584 seconds for the victory and the $10,000. Wagner, Lance Dewease, Ryan Smith and Mike Wagner rounded out the top five.

Lucas Wolfe was sixth followed by Danny Dietrich, who earned the $500 Valley Supply Hard Charger award after winning the B-main and starting 21st. Price-Miller earned the loan top ten finish for the All Stars in eighth and Jeff Halligan and Blane Heimbach finished out the top ten. All Star Bill Balog earned the $1000 J&S Classics Warrior Award via random draw after finishing 13th.

“There may have been something bent or broken on the car as it was a handful to drive those last final laps,” said Macri. “I got to give Logan credit as he easily could have driven through me in one and two when we both went to the bottom, so I got to thank him for that.

“The lap before I went to the top and he threw a slider, so I knew it was coming again. I thought we were both crashing. Logan and I kind of have a rivalry going and it was fun racing hard like that and getting a win.”

For Wager, the race reminded him of last season’s battle in the event when he used a similar move to hold off Macri to take him the win.

“How about the fans out there? It was an unreal race against a stout car,” said Wagner. “That’s the way it goes sometimes and I can’t be upset. I feel like we built a level of respect for each other and we drew a line in the sand. I got a good run there at the end and he shut the door and did what he had to do. I did the same thing to him last year and that’s just what you have to do sometimes.”

For Dewease, he was just a spectator at the end as he ran out of time to mount a serious charge.

“We were a lot better than we were in the dash as we were terrible, but we got rolling there at the end,” said Dewease. “I was really good there at the end, but those two are pretty good when in clean air and we’ll take the third and keep plugging away at it.”

Smith, Cap Henry, Price-Miller, Logan Wagner and Justin Whittall all scored heat race victories, which were worth $500 each courtesy of the night’s sponsor, Valley Supply.

Briggs Danner came out the top man in a mid-race three car battle between himself, Alex Bright and Mark Smith to score the USAC East Coast Sprint Cars victory Saturday night. The win was worth $2000 and was his second career victory at the Juniata County oval.

Ed Aiken and Smith led the field of 19 cars to the green flag and it was Smith getting the early lead on the field. Smith led the first seven laps of the event before giving way to Bright, who started fourth on the grid. Danner, who started third, followed suit to move into the runner-up spot as well.

Two laps later Danner used a slider in turn’s one and two to overtake Bright for the top spot and from there it was smooth sailing. Danner took the win easily over Steven Drevicki, who earned the $100 AV Frenchies Hard Charger Award for the event after starting 11th. Bright, Carmen Perigo and Smith rounded out the top five.