BELLEFONTE – In a game that had about a little bit of everything, the State College and Bellefonte 10-year-old Little League All-Stars put on a battle in a game that wouldn’t be decided until the final at bats.

In the end, it would be State College that would have their arm raised in victory, winning 7-6.

Picking up the win for the Little Lions on the mound was Anthony Hill. Coming in to pick up the save was Collin Rabideau. 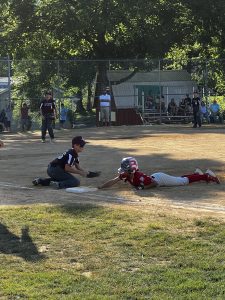 Offensively, State College were led by the bat of Wyatt Crane who went 3-for-4, and a run scored and Hill who also went 3-for-4 with a triple, a run and an RBI.

The visitors posted 12 hits in the game.

Going into the fifth inning, the two teams were tied at five.

State College took back the lead as they were able to plate two runs in the contest.

Hill hustled out an infield hit. He stole second.

Brighton Bean moved up Hill to third when he hit a grounder in between first and second.

Both scored on a Bellefonte miscue, giving the Little Lions a 7-5 lead heading into the bottom of the inning.

But Bellefonte was able to get one back in the bottom of the inning.

Hoover singled to start the inning. He was able to steal both second and third, setting the stage for teammate Ryan Hepfer. Hepfer did not disappoint as he hit a sacrifice fly, cutting it to a 7-6 game.

Bellefonte’s defense was able to hold the State College bats scoreless in its last at bats, giving its offense a one last chance to tie or win the contest.

After getting one quick out, Bellefonte were able to get two runners on.

However, Rabideau reached down and sent down the next two Red Raider battle to secure the win.

However, that lead would quickly be erased as Bellefonte bounced back for three runs of its own.

Starting pitcher for Bellefonte Coley Price put her team in the lead starting with a one-out triple in the third. She later scored on a wild pitch.

The Little Lions added two in the fourth, taking the lead temporarily.

But like it did in the first Bellefonte was able to tie things when Bellefonte Cody Bodte scored after reaching base on a fielders choice.

That would send the drama into the fifth in the instant classic contest.